The woke luvvies have given us a lot to talk about this week!

The Christian Porter rape accusations remind us all about the importance of the presumption of innocence, but has the Morrison government done enough to stand up to the kind of woke cancel culture that culminated in the extraordinary Christian Porter press conference this week? 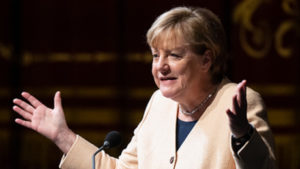 In the aftermath of Dictator Dan Andrews’ long Melbourne lockdown, what has happened to Melbourne bars? Has Dan been reading Machiavelli?

Judith Sloan on China and the Great Reset, the Green New Deal, ‘Build Back Better’ and other fascinations of the globalist elites.

The IPA’s Director of the Foundations of Western Civilisation Program Dr Bella d’Abrera on political correctness at the British Library and the British Museum, and what we can expect in Australia.

Fred Pawle on Dan Andrews’ destruction of Melbourne bars and Melbourne nightlife in the aftermath of the long Melbourne lockdown.

And Covers Editor Sarah Dudley on the way in which woke political correctness is erasing our culture.

‘Cultural cleansing’, Bella d’Abrera | Rather than preserving our history, museums are wiping it out

// SUBSCRIBE TO THE SPECTATOR AUSTRALIA AND GET THREE MONTHS FREE ????????

We have a special offer to celebrate the launch of Spectator Australia TV – Sign up today and you can enjoy ALL of our content for three months – ABSOLUTELY FREE.

That’s three free months of the weekly Spectator Australia magazine, all the articles in our online section – Flat White – and great international authors like Douglas Murray, Brendan O’Neill, James Delingpole – and many, many more.

All that, FREE, for three months. Just sign up here:

// DONATE TO DIE LAUGHING: THE BIOGRAPHY OF BILL LEAK

Bill Leak’s fight for freedom of speech must endure.

Help us fight cancel culture today by donating to support the publication of Die Laughing: The Biography of Bill Leak. And with a donation of $400 or more, you can recognised as a supporter of this very special book by having your name printed in the book, and you will also receive a copy signed by the author, Fred Pawle as our gift.

This is the second episode of CounterCulture, available exclusively right here on Spectator Australia TV, and presented by two of Australia’s most patriotic, freedom loving and anti-woke organisations – the Spectator Australia and the Institute of Public Affairs.

We will champion common sense and conservative values. We will be a voice for freedom of speech over censorship, diversity of thought over cancel culture, free markets over socialism, and individualism over shallow identity politics.