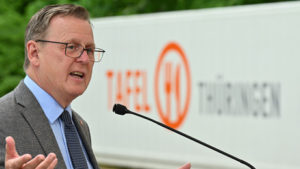 On December 30, 1946, aviation radiomen Wendell K. Hendersin, Fredrick W. Williams, and Ensign Maxwell A. Lopez were killed when their PBM Mariner George 1 crashed during a blizzard. The surviving six crewmembers, including Aviation Radioman James H. Robbins and co-pilot William Kearns, were rescued 13 days later. A plaque was later erected at the McMurdo Station research base, honoring the three killed crewmen.

In December 2004, an attempt was made to locate the remains of the plane. There are ongoing efforts to repatriate the bodies of the three men killed in the crash. Killed airman Maxwell A. Lopez had a mountain named in his honour after his death, Mount Lopez on Thurston Island.

Additionally, Vance N. Woodall died during a “ship unloading accident” sometime after December 30, 1946. In a crew profile, deckman Edward Beardsley described his worst memory as “when Seaman Vance Woodall died on the Ross Ice Shelf under a piece of roller equipment designed to “pave” the ice to build an airstrip.”

Father William Menster served as chaplain during the expedition, and in a service in 1947 he consecrated Antarctica.
The Central Group of ships reached the Bay of Whales on January 15, 1947, where they constructed temporary runways along the glaciers, in a base dubbed Little America IV.
Naval ships and personnel were withdrawn back to the United States in late February 1947 and the expedition was terminated, due to the early approach of winter and worsening weather conditions.

After the operation ended, a follow-up Operation Windmill returned to the area, in order to provide ground-truthing to the aerial photography of Highjump.

A highly controversial German documentary: UFO – Technology Secrets and the Third Reich. suggests at the end of the hour-long film, that the real reason for the High Jump expedition was to seek out a secret German UFO station still operating in the Antarctic.

This film is part of the Periscope Film LLC archive, one of the largest historic military, transportation, and aviation stock footage collections in the USA. Entirely film backed, this material is available for licensing in 24p HD. For more information visit http://www.PeriscopeFilm.com